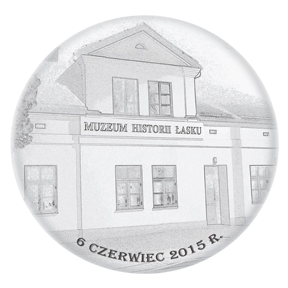 ESTABLISHMENT OF THE MUSEUM The history of Łask is rich in legends and stories depicting the origins of our town. Since the Middle Ages, the settlement on the Grabia river has had its good and bad times. In modern history, new heroes emerged in Łask whose deeds left indelible traces. Łask, the town with such unique history, had to wait a long time to have a museum commemo-rating its history. Local community eagerly commenced work on creating an institution where they could re-discover their past. Muse-um of the History of Łask was inaugurated on 14 June 1997 thanks to the efforts of the man-agers and staff of the Jan Łaski, Jr. Public Li-brary and with the support of municipal authori-ties. Originally, it was housed in the library rooms where a permanent exhibition under the title From the History of the Town and Region was set up.

NEW SEAT After 18 years, the Museum was relocated to the main town square, at 7, pl. 11 Listopada. The small townhouse, where it is located now, was probably built in the second half of the 19th century and perhaps served as a public building. This form of use can be inferred from its dis-tinctive structure and its central location in the town. In addition, the remains of a kitchen stove with a hood were discovered inside which was a typical fixture in the old post inns. From 1910 until Second World War, the house was owned by the Rogals. In the 1970s, the ground floor was taken by a pastry shop, popular among local residents and run by Remik, or Remigiusz Rendecki. The building, which was entered into the register of historic monuments, underwent a complete renovation under the revitalization programme of the Łask square in 2012-2013. The refurbishment, how-ever, preserved, its previous historic form and restored architectural details which became al-tered or lost over so many decades. The reno-vated townhouse recovered its beauty and rep-resentative appearance in the heart of town.

EXHIBITIONS The Museum offers 8 exhibition rooms in its new seat, located on the ground and first floors. The exhibition opens with artefacts found in archaeological sites in Łask and surrounding area. Then, the visitors can proceed to explore the history of the Łaski family and get trans-ferred to the era of struggles for independence in the 19th and 20th centuries. The ground floor display also includes exhibits presenting the history of military aviation in the Łask region. To improve accessibility for disa-bled visitors, the exhibitions located on the first floor can be followed on virtual tours. They are dedicated to the Łaskian crafts, schools and ethnography. The Museum collectibles reflect the daily life of people who used to live in the dwelling on the Grabia river. Further attraction for visitors provide interactive displays with some additional information on the town’s his-tory and a collection of traditional farming tools located in the sheltered area of backyard.

COLLECTIONS The Museum collects primarily regional ma-terials: archival and iconographic documents, maps, everyday objects and devices. The collec-tion also includes the World War II military antiques. Hospital registers, guild certificates and a collection of old photos and postcards are worth mentioning among their collectibles. All exhibits were donated by the residents of Łask and surrounding areas. Overall, we have about 2,000 inventoried exhibits and over 100 thematic files. New exhibits have not stopped coming; we truly appreciate the generosity of all our donors.

EDUCATION PROGRAMME The objective of the Museum is to promote historical knowledge among the residents and visitors to the town on the Grabia. We focus particularly on children and teenagers. We want to teach them respect for the history of their ancestors and the town they come from. We will be preparing special teaching sessions to famil-iarise them with the history of our homeland.